Jordan Overbee was driving to work when he saw them. The elementary school-aged youngsters were just waiting for the school bus, but they were sitting on a big green metal box. Inside was vital electrical equipment, distributing electricity to several homes on the street.

“It was a bad place for a school bus stop,” says Jordan. “There were five kids gathered there to wait for a bus, sitting, talking and playing for a few minutes because it was between driveways.”

As manager of operations for Wake Electric Membership Corp., Jordan knows a lot about pad-mounted transformers. They make up about half of the transformers used across the Youngsville, North Carolina-based co-op’s system.

“Transformers change voltage from higher levels to voltages people use in their homes for their electronics, appliances and lighting,” says Jordan. “Each of our transformers can be vital to providing electricity to several homes.”

After seeing the kids waiting at that same transformer several days in a row, Jordan pulled over and talked to some of the parents. He explained that high-voltage electricity flowed through the transformer inside the casing, and encouraged them to move a safer distance away.

“The parents hadn’t thought much about it, so once I explained the risks, they were happy to move to another driveway,” he says.

While overhead power lines are mounted on utility poles and substations are protected by security fences, pad- mounted transformers, switch boxes and pedestals are at ground level.
“We have about 5,400 pad-mounted transformers on our system,” says Van Crawford, vice president of operations at Peace River Electric Cooperative, head- quartered in Wauchula, Florida. “Of that number, 4,800 of them are in the western district of our service territory.”

While consumers seldom see technicians working on the transformers unless there are power outages, they are regularly inspected by co-op crews riding through neighborhoods.

“We can see fault indicators from the road,” Van says, adding that one of the biggest concerns is safe access when repairs or component adjustments must be made. “That’s why it’s important that landscaping and other barriers be kept clear of co-op equipment.”

Co-op technicians need at least 10 feet of clearance at the opening side of a pad- mounted transformer. Approximately 4 feet of open space is preferable at the rear and on the sides of the metal housing.

That distance allows for tool use, including hot sticks—typically 8 feet in length—used to work with energized equipment. It also ensures that one or two technicians working on a transformer have space to maneuver should they have to back away if problems occur.

“We once had a member use a transformer box as a workbench platform, and obviously we had to have him remove it,” Van says. “We always try to explain the risks. Most members are more than willing to be cooperative once they understand.”

Pad-mounted transformers are connected to primary high-voltage lines, and secondary lines can extend in several directions to distribute power to homes and businesses. That’s why it is important to check with Lane Electric Cooperative before planting shrubs or trees, setting fence posts, installing sprinkler systems and digging where it might damage underground lines.

“Lane Electric recommends that you contact 811/call before you dig for a site assessment and marking before proceeding with projects that might disrupt utility service and leave you with a repair bill,” says Tony Toncray, Lane’s operations manager.

While pad-mounted transformers in developed, suburban or urban areas are regularly inspected for damage from vehicles, many utilities use marking sticks or pennants to alert tractor, snowplow or heavy equipment operators of their locations. 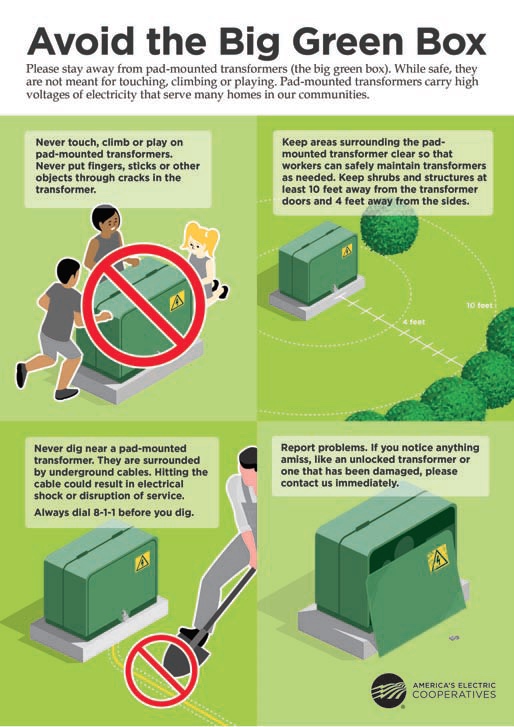