Story and photos by Craig Reed

For more than 100 years, the fish hatchery on the east side of Oakridge has reared several types of water-loving creatures, resulting in millions of fingerlings and smolts being released into lakes, reservoirs, ponds, rivers, and streams in the Cascade Mountains and Willamette Valley.

Today, production at Willamette Fish Hatchery averages 5 million fish, but it has reached 7 million when conditions are perfect and there is a need to increase the state’s fish production.

“This is a very smooth-running facility,” says Dan Peck, manager of the hatchery the past 14 years. “There is pride when releasing smolts in the best condition they can be. You’ve done your part. You hope the fish do their thing in the ocean and then return. We’re producing the best product we can for the public to enjoy.”

Salmon Creek—which flows through the 35-acre property—provides the hatchery and its fish operation with the constant water needed for success.

Under the guidance of Dan and nine fish technicians, the facility incubates eggs, hatches them, and rears spring chinook, summer steelhead, and rainbow trout into salmon and trout fingerlings, salmon and steelhead smolts, and legal-sized rainbows before release. Fingerlings are 3 to 4 inches in length. Smolts are 6 to 8 inches, and the legal rainbows are 8 to 12 inches.

“We have a good crew here,” Dan says, noting the technicians live on the property, making them immediately available if a situation threatens the health of the fish. “Everybody is in it for the right reasons. We work together with the purpose of putting fish out there for people to catch and put on their table or to catch and release.”

The hatchery was first built in 1912.

At that time, it focused on salmon egg production and was under management of the state’s Fish Commission, which dealt with fish that went to the ocean.

In 1922, a hatchery for trout was built on the property. It was under management of the Game Commission.

The two hatcheries were side by side but worked separately—each with its own staff. In 1955, the U.S. Army Corp of Engineers upgraded the dirt ponds for the salmon hatchery, and the site began rearing of fish. When the fish and game commissions merged into the Oregon Department of Fish and Wildlife in the early 1970s, the two hatcheries soon were operated by one manager and a larger staff.

The hatchery raises more spring chinook than any other species, at 3.5 million a year. The broodstock is collected at the hatchery’s satellite facility at Dexter Dam. The fish are transported to the Oakridge facility and held until they are spawned in September. The young fish are reared, have their fins clipped, are shipped back to Dexter to acclimation ponds, and then are released as smolts.

The Willamette Fish Hatchery also partners with the South Santiam Hatchery to produce another 1 million spring chinook for South Santiam, which does not have incubation and rearing ponds. It ships eyed eggs—developed to the point where the eyes are visible—to Willamette, where they are hatched and reared before being returned as fingerlings.

The two hatcheries also partner on summer steelhead. South Santiam sends 300,000 eyed eggs to Willamette, where they are hatched and reared. Some are acclimated in the Dexter ponds and released as smolts into the Middle Fork of the Willamette River below Dexter Dam. Others are transferred to the Leaburg and McKenzie hatcheries as fingerlings and released into the McKenzie drainage as smolts.

For its rainbow trout program, Willamette receives 1 million eyed eggs from the Roaring River Fish Hatchery at Scio. The eggs are hatched. After the fish reach 8 to 12 inches in length, they are released into waters from the mountains to the valleys. Trout are also sent to the Leaburg hatchery, where they are released in central Lane County and the McKenzie River drainage.

Staff hopes for a smooth operation during the annual rearing of these millions of fish at the Willamette hatchery, but Dan says problems can pop up along the way.

He says the Salmon Creek water is almost pathogen-free, but there can be “a little bit of a parasite problem, mainly for the rainbows and steelhead.” A chemical can be added to the water to treat external parasites.

A cold-water disease can also impact the trout and steelhead, but that can be treated with antibiotics added to the fish feed. 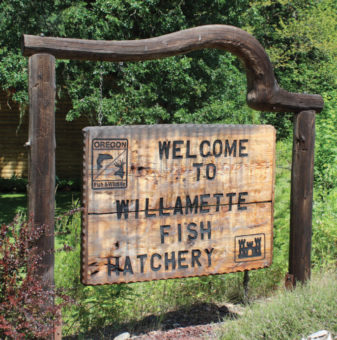 Under normal circumstances, these treatments take place a year before fish are released from the hatchery.

“We want to make sure the operation is done properly in order to create the best fish product, but we can’t control Mother Nature,” Dan says. “She can throw a monkey wrench into the best of plans, and you have to react.”

Last December, the Willamette hatchery began using its recently installed recirculation aqua system—the first such production facility in Oregon. The system raises fish on recycled water in a controlled environment with no diseases, predation, or outside influences.

“It’s designed for rainbows, but you can raise anything in it,” Dan says. “It’s just that every species will be different in how you manage the system. It’s a learning curve—a whole new way of looking at fish culture.”

About the Hatchery Manager

Dan Peck grew up on a cattle ranch in the Reedsport area. He was attracted to working with fish when visiting the hatchery at Lincoln City, where a friend’s father was the manager.

“I liked it,” Dan says. “I loved the outdoors, and I wanted to do something in natural resources.”

Dan earned a two-year degree in fisheries technology at Mount Hood Community College in 1989. He has worked for the Oregon Department of Fish and Wildlife for 31 years—the last 28 years at the Willamette Fish Hatchery.