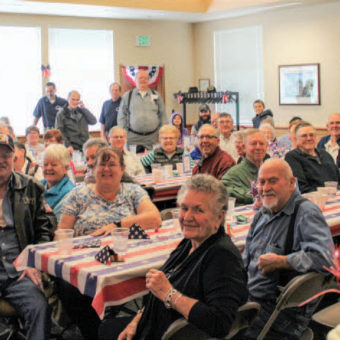 Crow High School’s nine- piece band performed the National Anthem and other patriotic music. Immediately after, the band departed for Washington, D.C., to play in the Parade of Heroes. Nominated for this honor by an anonymous veteran, the band was the only group selected from Oregon.

“Performing in the Parade of Heroes at our nation’s capital is a tremendous honor, and we are taking the responsibility very seriously,” says Band Director Pat Dixon, whose father was a veteran. “The Crow High School Band is very small but they play at the highest level, always elevating to the demands of the music.”

The Crow community helped raise more than $15,000 for the band’s trip.

“The fact that this opportunity is bringing some positive attention to a small school district and a small music program is truly remarkable,” Pat says. 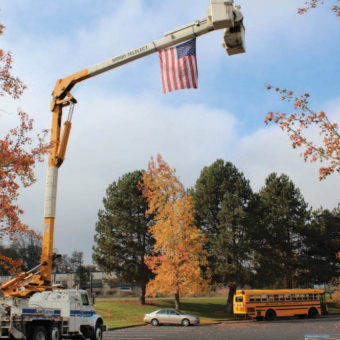 Lunch guests heard from Dr. John LeBow, founder of Veterans Legacy in Alma. The nonprofit provides integrated treatment to address medical and psychological needs of veterans, with an emphasis on therapeutic agriculture.

“Many of my family members are veterans, so it’s important to me that we honor and recognize those in our community who have served our country,” Julie says. “I’m thankful that Lane Electric has given us the opportunity to show our support through this event.”

If you are a veteran and were not notified of this event, please contact us at 541-484-1151 so we can include you next year. Thank you.