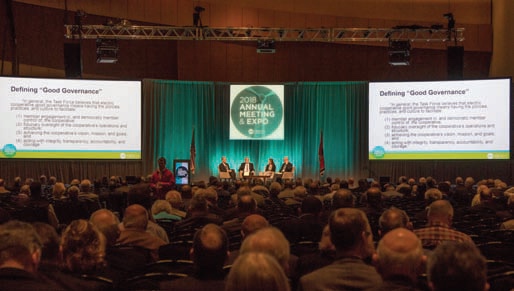 How can a day in the life of an electric cooperative director be described?

One Lane Electric director, J. Ingrid Kessler, says her position has brought her times that are as exciting as can be.

“Being on Lane Electric’s board of directors is a huge responsibility,” says Ingrid. “With that responsibility has come opportunity, which is how I found myself on stage in front of thousands of people.”

Last year, Ingrid was appointed by the National Rural Electric Cooperative Association to a task force of 20 people from across the United States to examine cooperative governance and ethics.

The Governance and Ethics Task Force met several times throughout the year in a variety of locations across the country. The meetings focused on such topics as how electric cooperatives conduct elections, clarifying cooperative directors’ fiduciary responsibilities and the role of the co-op attorney and more.

“In part, we discovered that the old saying is true: ‘If you’ve seen one co-op, you’ve seen one co-op,’” Ingrid says. “As a group, we embraced the Seven Cooperative Principles, using them to produce a report that can be used by boards across the country as a guideline to examine governance.”

The task force presented its findings to attendees at NRECA’s annual meeting in Nashville.

“It was a breathtaking honor when I was asked to represent the committee at NRECA’s annual meeting,” says Ingrid. “It was a day I’ll always remember. Directors from across the nation were so kind and warm in the reception they gave us.”

As much of an honor as it was to represent Lane, Ingrid says she’s glad to be back in the Lane Electric boardroom.

Ingrid represents Lane Electric’s Central District from the Briggs Hill area south of Eugene. She was elected to the Lane Electric Cooperative Board of Directors in 2014 and re-elected in 2017.