By combining their individual skill sets, Jessica Jones and Scott Perkins figured they could create a sweet business operation.

Scott had three years of experience as a beekeeper and a handful of his own beehives. Jessica had marketing and sales experience from working in the beverage and food industry.

The couple established their own family business, Queen’s Bounty Honey, in 2016 on rural property off Territorial Highway.

Now in their fifth business year, Jessica and Scott have a successful operation with around 600 beehives, an annual harvest of hundreds of pounds of honey and honeycomb, and a market for those two products in numerous stores and gift shops around Oregon and at a couple of airports.

“Scott suggested Queen’s Bounty and I loved it,” Jessica says of the business name.

A queen bee is most important to a hive and the making of honey.

“We’ve put in a ton of work,” Scott says. “I’m happy with where we have ended up. Hard work just pays off.”

Scott, 38, got into beekeeping for a couple reasons: He loves to eat honey and he was fascinated as a kid by the queen bee that his uncle ordered through the mail to launch a beekeeping hobby. With a big smile, Scott says there’s nothing like honey on cornbread.

“When the opportunity to be a beekeeper came available as an adult, I jumped at it,” says Scott, a Michigan State University graduate whose degree has an emphasis in biology, entomology, and understanding how organisms work together.

He completed the yearlong Oregon State University Extension Service’s Master Beekeeper Apprentice Program. He then worked as a beekeeping employee for three years and at the same time established several hives of his own on a hobby basis.

The two met while living in San Luis Obispo, California, and married in 2013 after moving to Lane County.

Jessica was using her business skills while working for a family-owned brewery when the couple decided to turn their focus to a bee and honey business.

“We thought we had complementary skill sets,” Jessica says. “Scott knew he could answer the bee questions, ‘Are they queenless, do they need to be fed, are there mites?’ I felt like I could do the packaging and selling.”

Jessica and Scott appreciate the skills each bring in making their business a success.

“It’s pretty amazing to see how Scott reads what the bees need,” Jessica says. “It takes years to get to that point where you know what you’re doing, and he’s nine years in.

“I don’t envy him out there in January in the sleet moving hives. They’re heavy and it’s hard.”

Scott is quick to say he would rather do 10 hours of production with the bees than five hours of selling.

“Jessica’s doing a great job selling,” he says. “You have to be on all the time as a salesperson, and she’s able to do that.”

Scott drives a load of hives to almond orchards in California for the month of February and then takes hives to different locations in rural areas around Eugene during Oregon’s honey-making season of March through July, when plants and trees are in bloom. The hives are placed in agricultural settings, but also in home yards.

Scott says people can be bee-friendly by planting pollinator-friendly plants. One resource for those interested in helping the bee population is the Pollinator Partnership.

When Scott brings the hives back to his home property, he harvests surplus honey, but leaves enough in each hive for the bees to feed on during the winter.

Honey from the different hives is not blended together but is kept separate and packaged according to where it was produced. That allows there to be different varieties, such as blackberry, wildflower, and forest flower.

After the honey is bottled and the honeycomb is packaged, Jessica makes deliveries to retail sites and individuals who have made purchases through Queen’s Bounty Honey’s website. 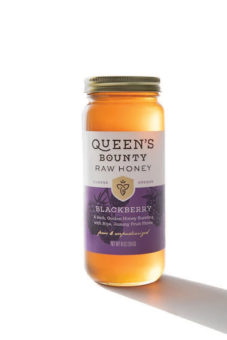 “Nothing is guaranteed,” Jessica says of the business. “You have to work at it constantly. Anybody who does farming knows you’re at the mercy of the weather. Things can happen with the bees. You always have to be looking ahead to deal with any issues.”

The couple say they have enjoyed growing with the business in a rural setting.

“It’s been a wonderful experience,” Jessica says. “Do I want to wake up, go to an office, and trade stocks all day? No. It’s wonderful working with my spouse, working on the property in a beautiful setting, controlling my own schedule.”

“A rewarding part of this,” Scott says, “is you see something completely through the process, from farm to jar.”

Jessica and Scott are pleased their decision to turn honey into a home business has resulted in a sweet deal.