Christmas lights and decorations have been a major part of Ryan Hoffstot’s holiday life since he was a little kid.

Ryan remembers being thrilled when his father, Rod Hoffstot, decorated their Creswell home with tons of lights and 30 to 40 plastic blow mold decorations. When Ryan got older, he was able to help with the setup.

The son continues the tradition—even expanding it—at his home in the Creswell area at 31208 Camas Swale Road.

“I love Christmas,” Ryan says. “I love seeing joy in people. I love seeing kids smile while hanging out car windows and looking at the display.”

Christina, Ryan’s wife, says she is amazed by the passion her husband puts into the Christmas display, but not really surprised.

“He doesn’t do this for the recognition. It’s great his hard work is recognized, but we just love to see the smiles on children’s faces as the families come through.”

While Ryan begins bringing lights and decorations out of storage mid-October, Christina isn’t far behind in her planning to decorate inside their home. She puts up six Christmas trees and numerous other decorations.

Ryan starts putting up displays in late October, works at it through November, and opens his driveway to the public for viewing the decorations the weekend after Thanksgiving. He turns the lights on at 5:30 p.m. and flips the switches off at 9 p.m. daily.

He estimates 2,000 vehicles drove up the driveway and viewed the Christmas display last year. During several evenings, the family and their friends had to direct traffic.

Santa Claus and Buddy the Elf have made appearances at the display in past years. Ryan says there is a rumor the Grinch might make an appearance this year.

To further add to the holiday atmosphere, Sydney and Jillian enjoy serving hot chocolate drinks and candy canes to visitors. Donations are used to buy gifts for troubled youth at the Jasper Mountain Center and Toys for Tots.

Ryan has been a Creswell resident since his family moved to the area when he was 5 years old. He graduated from Creswell High School in 1999. He attended College of the Siskiyous in Weed, California, and then Lane Community College in Eugene before entering the workforce.

After a few years working in the tire and electrical industries, a friend talked Ryan into giving the insurance field a try. Ryan’s father had opened a Farmers Insurance office in Creswell in 1975, but it took his friend’s encouragement for Ryan to give it a try. When his father died in 2008, Ryan took over the office and has owned it since.

“God has blessed me with a good career and a great community,” Ryan says. “Now I’m able to help other causes and it’s nice to give back.”

Ryan calls putting up the Christmas display a labor of love. While setting up the decorations, enjoying them, taking them down, and packing them away is about a three-month process, Ryan and Christina are on the lookout for vintage and new decorations—especially those made from blow molds—year-round. They check out garage sales and keep watch for online postings of decorations.

Some of their oldest decorations include one mold-created decoration dating back to 1966, and a group of brightly colored angels and carolers from 1964.

“My obsession for blow molds has grown,” Ryan says, adding that groups on Facebook are dedicated to blow molds.

Because the display has become such a large endeavor, Ryan and Christina are getting more help. Christina’s father, Bob Pickett, has become the repairman for any of the decorations that need fixing, and the Hammonds family—friends of the Hoffstots—and some church friends have volunteered to help.

“It’s definitely an undertaking,” Ryan says of the process. “But it puts joy in my heart to see how much people enjoy it.”

“We’re here to celebrate the birth of Jesus, and to celebrate our family and the wonderful things we’re blessed with,” adds Christina. “There’s joy in giving back.” 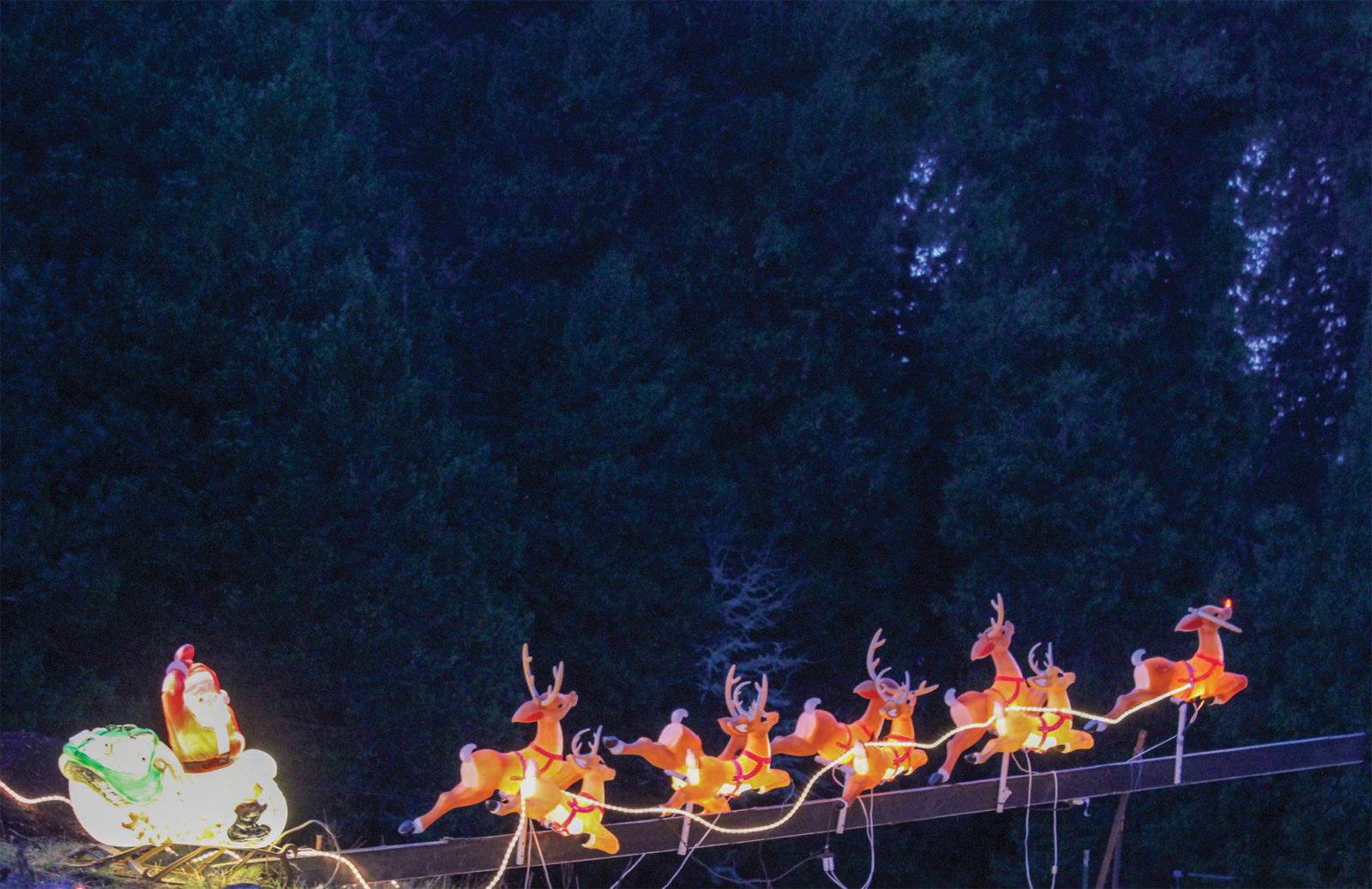