In 2015, Noah Strycker set out to spot more birds in one year than ever done before 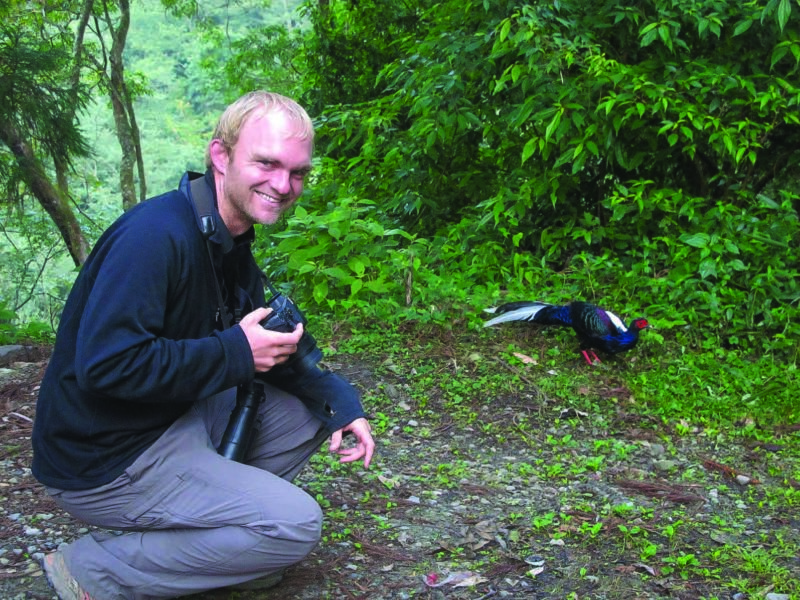 Noah Strycker had a record year in 2015, spotting 6,042 different bird sightings in one calendar year.

Noah started his record year on a Russian ship in Antarctica, where penguins are plentiful and 24 hours of light in January allow for long hours of viewing.

He visited South America, Central America, Mexico, the U.S., Europe, Africa, Asia, Australia and then back to northeastern India, where there is an extremely diverse population of birds. Noah’s 1,000th sighting was a pied-crested tit-tyrant in Peru in February. Number 2,000 was a shiny honey- creeper in Panama in April, and 3,000 was a tawny pipit in Turkey in June. In August in Tanzania, a mountain gray woodpecker was his 4,000th sighting, and in October in The Philippines he saw a flame-crowned flowerpecker for number 5,000.

On December 29, a yellow-rumped honeyguide was Noah’s 6,000th bird. He saw several other species in that region before the year ended two days later, completing his big year by seeing a silver- breasted broadbill during the afternoon of December 31 and an oriental bay-owl that night.

“For me, birds are fascinating, with beautiful songs, gorgeous colors and interesting behaviors,” Noah says. “When you study them, they take you to surprising places, both literally and figuratively. Birding is a journey not just around the world, but through life itself. If that sounds odd, then you can just say I’m a hopeless bird addict.”

Noah packed a lifetime of birding into one intense year. He wrote a daily blog about his trip, describing what he saw and introducing readers to other birders who helped him along the way. After completing his trip, he wrote “Birding Without Borders,” a book that detailed his quest.

Noah used EBird, a public- driven bird sighting database, to help him determine in advance where and when to find the most species. He used BirdingPal, a website that connects birders and local birding guides around the world.

In his final blog of 2015, he writes that there was more to the trip than the birds.

“Of course, it’s not all about the numbers,” he writes. “The people I met and the landscapes, cultures and communications along the way made this project memorable. I knew I’d see a lot of birds in 2015, but the quest transcended any list of species. Thanks to everyone—in the field and at home—who helped out.”

When Noah wasn’t traveling between areas, he was up before dawn to be outdoors at daybreak. He was also up many nights, looking for nocturnal birds and writing his blog, which got more than 10,000 visits a day by the end of the year.

“I literally birded every day, all day,” Noah says. “I met and birded with hundreds of local birders all around the world. For the most part, birders love to show other birders their home turf. People were very friendly and very helpful. It became a grassroots effort, networking with the local birders.”

Noah, 32, who lives east of Creswell in the forested foothills of the Cascade Mountains, has made being a bird addict his livelihood. He is author of three bird books and associate editor for Birding Magazine. He has written articles for numerous birding publications, and has been the bird expert and guest speaker on board ship and on shore tours for several small cruises and National Geographic expeditions.

“I never would have predicted making a living from watching birds,” Noah says. “It’s not really a job. It’s a life- style. I feel very fortunate to be able to do this. I love it. I never get tired of birds.”

Noah first became attracted to birds when he was a fifth-grade student in Eugene. His classroom teacher put a bird feeder with a suction cup on the outside of a window and would stop class every time a new bird came to the feeder.

“I thought that was pretty cool, that there were details to tell these birds apart,” says Noah, who soon began to take note of birds around his home.

He was interested enough his parents, Bob Keefer and Lisa Strycker, drove him to the monthly meetings of the Southern Willamette Ornithology Club.

“They were delighted to have a 12-year-old show up,” Noah says. “They took me on some field trips. I became a full-on bird nerd.”

Bob says Noah has had this single focus for 20 years.

“He’s happy to be birding every day,” Bob says.

Noah graduated from South Eugene High School in 2003. For the next year, he volunteered and worked on bird research projects, including helping at the visitor center at the Malheur National Wildlife Refuge south of Burns.

In 2004, he enrolled at Oregon State University in Corvallis. Four years later, he graduated with a degree in fisheries and wildlife science and a minor in fine art.

Despite his degree, he admits with a laugh he doesn’t know much about fish because his specialty is birds.

After graduation, Noah worked as a seasonal field biologist, mostly in remote places. He spent three months as an intern with two researchers camped out in Antarctica with about 300,000 adelie penguins. Researchers put GPS tags on the penguins and studied their movements.

He blogged about that experience and was encouraged to write a book about the trip by Oregon State University Press editor Mary Braun who read the blogs. Noah wrote “Among Penquins,” a narrative-style book with color photos that detailed his adventure and experiences of a summer in Antarctica.

That book was well enough received that Noah began work on another book. “The Things With Feathers” detailed his experiences from other research projects and travels. Released in 2014, it was on the New York Times Best Seller list in the Animal Division, was a New York Times Editor’s Choice, and was translated into several languages and distributed internationally.

The success of those two books led to Houghton Mifflin Harcourt Publishing Co. offering Noah an advance to make a year-long global birding trip and writing a book about it. The concept was approved and agreed upon in August 2014. After a lot of research, making travel plans and networking with birders around the world, Noah was back in Antarctica to start viewing and counting at 12:01 a.m. January 1, 2015.

Each of his eventual 6,042 bird sightings was witnessed by at least one other birder.

“Birding Without Borders” was released in 2017. A paperback version was recently released.

Noah’s one-year birding record did not last long. A birder from The Netherlands toured the world in 2016 and had 6,833 sightings.

Noah says records are made to be broken, and he may give it a try in a coming year.

“I missed 4,000 species of birds on my trip because there are well over 10,000 species,” he says. “I may just have to go back and look for the rest—although I don’t think it is possible to see them all.”

This year marks the centennial of the Migratory Bird Treaty Act—an important bird protection law. To recognize and celebrate that act, the National Audubon Society and National Geographic declared 2018 as the “Year of the Bird.”